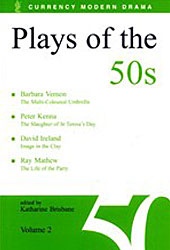 by Barbara Vernon
Published in Plays of the 50s: Volume 2

The play was significant in the origins of Australian realist drama and was runner-up to Richard Beynon's The Shifting Heart in a play competition held by the Journalists' Club in Sydney in 1956. It premiered in 1957 and was broadcast by ABC TV in January 1958.