CLOSE TO THE BONE 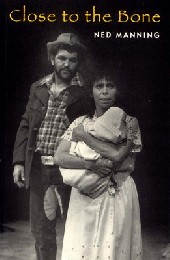 CLOSE TO THE BONE

by Ned Manning
Written with students from the EORA Centre in Redfern in 1990, some of whom were members of the Stolen Generation, Close to the Bone is a story about a family’s survival in the face of adversity. Moving from the Mission to Redfern and back again, it celebrates Redfern’s role in providing a focal point for dislocated Indigenous Australians. The play also honours the role EORA played in bringing people together and linking them with family. It was first performed by EORA students at the old Centre in the heart of Redfern. It was directed by Lydia Miller, David Kennedy and Rhoda Roberts with music by Scott Saunders and Karen Vaughan.

Close to the Bone is a large cast play that is suitable for students of all ages and youth groups.

‘This play presents the issue of the stolen generations with an authentic Aboriginal voice and gives a powerful impression of the continuing human impact of bureaucratic decisions on Aboriginal families, both in the past and now. The New South Wales Aboriginal Education Consultative Group fully supports and endorses the publication of this play.’ Linda Burney, President, NSW AECG