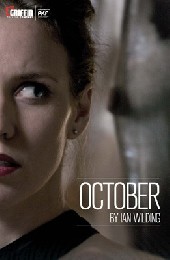 by Ian Wilding
Tim, an airline pilot and Angela, his young, beautiful wife, live the successful urban dream in a streamlined apartment in the inner city. One night a friend of Angela's, Dez, pays them a visit. There's just one problem: Angela flatly denies she's ever met him, and despite Dez's growing protestations, she wants him out. Rejected and humiliated, Dez leaves. But not before making some seemingly ominous threats. Now Angela and Tim are having trouble readjusting. Dez has thrown their comfortable lives out of kilter and fear of future incursions escalates.

Enter Dick, private eye – smarmy and menacing by turns, a Man who Makes Things Happen. Though he charges by the hour and his approach is definitely unconventional, Dick may be exactly what the situation requires...