LUCK OF THE DRAW 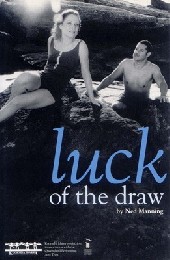 LUCK OF THE DRAW

by Ned Manning
Luck of the Draw, produced by Brisbane’s Kooemba Jdarra and subsequently by the Darwin Theatre Company, is a play about Indigenous survival and identity.

Written as a response to the Howard Government’s refusal to offer an apology, Luck of the Draw is a hard hitting play that deals with the tragic consequences of the forced removal of Indigenous children from their families. It focuses on the impact this policy had on both the parents who lost their children and the children who lost their identity. It confronts the issue of identity from the perspective of a fair skinned Indigenous woman who has been raised in a white middle class family and discovers she is Indigenous.

Luck of the Draw is based on Ned Manning’s experiences at the EORA Centre in Redfern in the late 1980’s and early 1990’s. It draws heavily on his own children’s experiences in being accepted as Indigenous on the strength of their heritage and identification rather than their skin colour.

'A mesmerising piece of theatre.' The Australian

Please note: This title is available on demand. If you are interested in buying a class set please contact us.