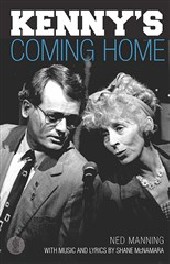 by Ned Manning
Kenny's Coming Home is a play with music that celebrates life in Sydney's western suburbs.

The Green family escapes inner-city Sydney in the early 1990s for a better life out west. Dad grows zucchinis and involves himself in local politics. Aunt Dorothy and Mum find the community they have been missing in the big smoke. Son Kenny leads the Panthers to rugby league glory and is ordained a local legend as a result. Daughter Kim is caught between a rock and a hard place as she tries to make sense of her teenage years.

All hell breaks loose when the local MP drops dead playing squash. Dad decides to seek pre-selection for the Labor Party and tries to co-opt Kenny for support. The family is opposed to his plans. Then they start actively campaigning against him …

Kenny's Coming Home is a shining example of community theatre [...] The political agenda of Ned Manning's play is serious: the loss of humanist ideals, the sacrifice of principles to pragmatism, but the message that comes through the music and the production is that it's all in the cause of a foot-tapping, broad-grinning, hand-clapping good time. Bob Evans,
Sydney Morning Herald (1991)