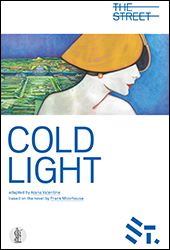 by Alana Valentine
Adapted from the novel by Frank Moorehouse

Here comes Edith Campbell Berry, fresh from International acclaim at the League of Nations, handsome British diplomatic husband in tow. Look out 1950’s Canberra, she’s on her way to the top. Or is she?

The League was after all a failure, and hubby dear is a secret cross dresser and her long lost brother is a Communist agitator watched by a fledgling ASIO. Maybe those dreams of renewed diplomatic honour might take longer than she thinks to materialize. A lot longer. And so to be ‘acceptable’ she consults the Book of Crossroads, bungles her inner life, remarries badly, and compromises her career options.

An epic story of national significance, Cold Light surveys the transformation of Australia from the post-WWII Menzies era to the mid-1970’s Whitlam government and asks timely questions about Australia’s relationship to women of vision and people of difference.