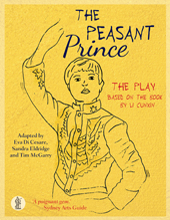 by Eva Di Cesare et al
This extraordinary play for young people is an adaptation of Li Cunxin’s picture book The Peasant Prince - the true story of Mao’s Last Dancer. Adapted by Monkey Baa, Australia’s leading theatre company for young audiences, The Peasant Prince has toured nationally, performing to tens of thousands of young people and their families throughout rural and regional Australia.

Li, a 10-year-old boy, is plucked from his village in rural China and sent to a ballet academy in the big city. He leaves everything and everyone he loves, including his family. Over years of gruelling training, he transforms from an impoverished peasant to a giant of the international dance scene. What does he find along the way?

The Peasant Prince is a remarkable true story of courage, resilience and unwavering hope.