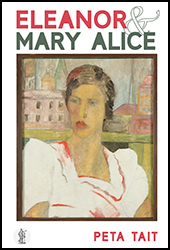 by Peta Tait
Eleanor Roosevelt’s epic flight across Japanese patrolled sea to Australia in 1943 during WWII stands out as heroic. Evading Winston Churchill’s visit to the USA for his meetings with her husband, President Franklin D. Roosevelt, Eleanor confesses to Mary Alice Evatt—wife of Doc Herbert Evatt, Minister of External Affairs during WWII—that she is dreading the official receptions in Australia. Artist Mary Alice tries to dissuade Eleanor from flying to the battlefront as she solicits Eleanor’s assistance to guarantee Roosevelt’s war support to Australia.

In Paris in 1948, Mary Alice visits Picasso and Australian artist Moya Dyring, Eleanor chairs the committee developing the Universal Declaration of Human Rights at the United Nations, and Doc Evatt works hard as the first elected President of the General Assembly. Eleanor and Doc Evatt need to meet together but he is avoiding her.

At the 70th anniversary of the Universal Declaration of Human Rights, Eleanor & Mary Alice implicitly reveals what these women contributed to political events as it highlights Mary Alice’s importance to Australian modern art and the arts as a human right (Article 27). The Evatts and the Roosevelts had shared values including an understanding that the arts can advance freedom, equality and social justice.