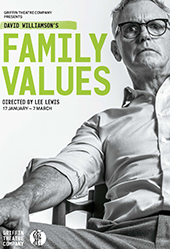 For 50 years, David Williamson has shown us the best and worst of ourselves. In this blackly comic drama situated squarely on the fault lines that divide Australia, David is at his angry best: furious that his generation has retired from defending the socially compassionate values on which they claim to have built this country. The play asks us to choose freedom over reputation, empathy over franking credits; to abandon a deeply flawed system for the sake of humanity.