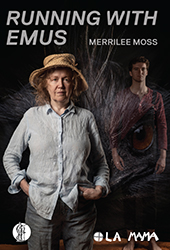 Running with Emus is a new, non-naturalistic Australian play written by the AWGIE award-winning regional Victorian playwright, Merrilee Moss (Night Breakfast 2010, Tango Femme, 2011, Oriel, 2013). The story, set in two different time zones, is about the conflicts and dynamics that arise in a small town near the Murray River as it considers becoming a "Refugee Friendly Town”.

Seventy-six year old Patricia has dropped out of life. She is living on her verandah, watching birds, waiting for her time to come, when her granddaughter arrives to stir up the town. Throw into the mix a ghost from the past, a bigoted Mayor and a chorus of laconic locals. This is a tragi-comic play about what it is to be Australian in a multicultural world; a small town story reflecting a global phenomenon about identity, belonging and coping with change.