THEY SAW A THYLACINE 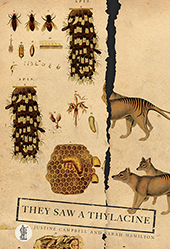 THEY SAW A THYLACINE

by Justine Campbell, Sarah Hamilton
Included in the Of The Island Collection

Out of the darkness, Justine Campbell and Sarah Hamilton conjure the ghost of one of Australia’s lost beauties, the thylacine. With all the suspense of a campfire story, these feisty, funny women weave a lyrical tale of adversity and extinction. For this thylacine tracker and this zoo keeper’s daughter, it’s a quest not just to protect a threatened creature, but themselves. Rebellious and gutsy, these women face life and fight to survive.

THEY SAW A THYLACINE is published in the collection ENDANGERED: THREE PLAYS