THE NARGUN AND THE STARS 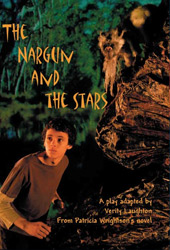 THE NARGUN AND THE STARS

by Verity Laughton
A young boy, Simon Brent, has been living in an orphanage in the short period since both his parents’ death in a car crash. He has arrived at Wongadilla, a small sheep holding belonging to his mother’s second cousins, Charlie and his sister, Edie. They have offered to take him in.
Initially, Simon resents Charlie, Edie and Wongadilla itself. As Simon begins to explore the mountain, swamp, gullies and forests around Wongadilla, he meets the mischievous, magical and ancient creatures that inhabit this place. His most frightening discovery is that of the Nargun, an ancient stone creature that has only very recently come to lurk in the gully at Wongadilla. Nargun threatens to upset the balance and harmony of the area. As the folk creatures attempt to defend their land from humans, earth moving equipment and bulldozers begin to disappear. Then Simon himself is threatened by the Nargun. Simon comes to understand the conflict created by the co-existence of the settlers on the land, the ancient beings and the Nargun and learns that it is only by listening to the voices of the oldest inhabitants of this land, that a solution might be found.