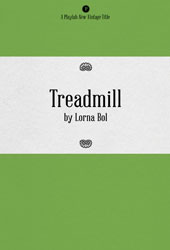 by Lorna Bol
“Lorna Bol has a canny ability to capture and convey themes and issues that hover in the everyday and unsaid. Through her deft use of words Bol invites us to re-see the easily ignored. Bol’s arresting drama is the quotidian at its most gripping and affecting."


Life is tough for Ma McTaggart and Ma is tough on Ruby, her only daughter and daily annoyance. Ma and her son, the faultless fisherman Dick, together with Ruby, eke out an existence in a small town on the North Coast of New South Wales. Aside from visits from her docile friend Dot, Ruby finds nothing but hard work and harsh words at home. Seeking solace elsewhere, Ruby falls pregnant to a married man and so, unwittingly, she sets off a series of tragic events that see the treadmill of drudgery continue to turn. Simultaneously, as their fates unravel, Ma and her daughter grow further apart yet closer together than ever before. It seems there is no escaping the cycle that haunts them.

Set in the 1940s in a North Coast town of New South Wales Treadmill captures the economic, educational and, arguably, emotional poverty that women such as Ma, Ruby and Dot were faced with. The three women of the play are trapped in bodies that will never be as useful as a man’s. Their unique, authentic dialect is as raw and honest as the words they speak: their words damage, divide, drive apart and bring death. Yet they cannot harness the power of speech to change their path in an impoverished, patriarchal society. And thus the treadmill claims them.