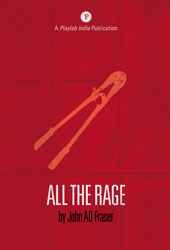 by John Fraser
It’s London 2012, and the greatest show on earth is about to commence. On the surface it’s peace and love and plastic lanyards. But deep beneath the stadium a terrible beauty stirs. The boys are going back to war.

For former commander Skin-the-Goat, laying down of arms has brought the trappings of power but drained him of respect. So he puts the band back together for one more operation. As well as bringing the peace prize he feels he deserves, he’ll impress the ambitious journalist Nina, who he hopes will break more than just the story of his last-minute intervention.

Coercing the young and Viet Cong-obsessed Boyler into action, Skin-the-Goat hauls his best but traitorous bomber The Baker back and prepares the scene to send the Olympics off with the ultimate bang.

As long as he keeps the plan on track, he’ll keep the peace, the prize, the girl, and a neat revenge on the quisling who forced him to stop the war in the first place.

But playing with embers is dangerous. War, like love, is easier to start than to stop. And just like the Olympics, not everyone is ready to play by the rules.