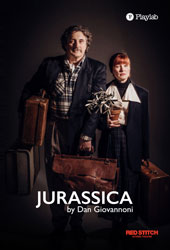 by Dan Giovannoni
I go, running, downstair, outside, go past a well and past Ugo house. All way until the village it nearly stop. Poi lo sento. Under the ground. Un brontolio.

Ralph and Sara left Tuscany in the 1950s as part of the ‘populate or perish’ scheme and built a new life in Melbourne. Kaja fled war-torn Belgrade in the 1990s; arriving in Australia felt like coming to paradise. Now working as an interpreter, Kaja is called to a hospital one night to help a young man reconnect with his grandfather.

Developed during his time as Resident Writer at Red Stitch, with Dramaturge Gary Abrahams, Dan Giovannoni’s magical new play, Jurassica, weaves the past and present together, exploring what it is to migrate, to be displaced and to spend the rest of your life searching for home.