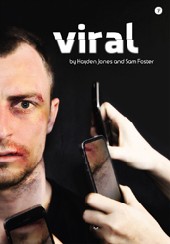 As society attempts to keep up with the rapidly changing and thrilling new world of social media and viral videos, how do we define our social responsibilities?

Viral is a story about Art and Zane, two boys who seek to attain internet ‘fame’ in order to become more popular at school and to make some money. It examines the role of social media and technology and how it impacts the way we record, communicate and think about events of racism, abuse and violence in our community. It investigates the line between disassociation and raising awareness about such events, asking the question “is it better to record these activities and post it on the internet or step in and stop it from occurring in the first place”?

Inspired by true events that happened in our very own communities Viral uses physical theatre, multiple role-sharing, verbatim, political theatre and live music fuelled with intensity to create visceral and dynamic Theatre for Young People. Viral is an example of Shock Therapy Productions’ signature style of doing as much as possible with as little as possible.